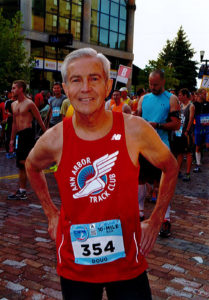 Affectionately known as the “Silver Bullet,” Doug Goodhue is an Elite Masters Runner with countless American Age Group Records to his name, on the track as well as mid- and long-distance races.  In 2015, he ran the World’s Best Time for 12,000m in his age category. He has been recognized by the USA Track & Field (USATF) as Outstanding Age Group Athlete of the Year ten (10) times, and was inducted into the USATF Masters Hall of Fame in 2015.  In 2010, he was named the Master Runner of the Year by the Road Runners Club of America (RRCA).  Doug is a 35-year Charter Member of the Ann Arbor Track Club.

While Doug’s long list of accomplishments and national records are certainly impressive, what makes Doug truly special to the entire running community is his passion for the sport and his willingness to share his expertise and skills with everyone.  As the certified Race Director for the Dexter-Ann Arbor Run, Doug has spent countless hours putting together the pieces of this signature race to deliver a seamless and perfectly executed event – something that undoubtedly harkens back to his days as a construction manager.  He has also served as the Operations Manager for Trail to the Victors 5k in Ann Arbor, and from 2010 through 2012, directed the USATF Masters 10k championship race in Ann Arbor.

As a certified running coach (USATF and RRCA), Doug led the Running Fit Northville/Novi 501 Training Program through the program’s 17 successful seasons, mentoring runners of all paces.  While his duties as a Race Director for multiple area races and his own racing schedule leave little time for him to devote to coaching, the 501 Running Club is privileged to have Doug’s continued participation and resources as one of our members.  Despite his highly competitive nature and love for speed, Doug is known to run with a diverse group of runners with varying speed. You can always test your fitness by asking Doug to run with you.  But be forewarned – Doug is a fantastic storyteller.  If you run with Doug, you are guaranteed to come away with a great workout and at least one fascinating story to take home.

But above all, Doug is most proud of his family. Cindy, his bride of 26 years, loves running just as much as Doug though she is not as competitive; in 2005, Doug ran the Boston Marathon with Cindy all the way from Hopkinton to Boylston Street.  Doug and Cindy are proud parents of four daughters (two each from previous marriages), 10 grandchildren, and Annie – their family dog who is a familiar face among the 501 members. 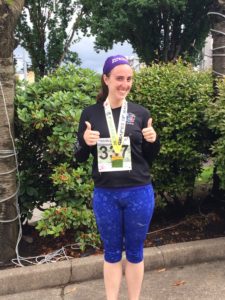 I started running when I lived in North Carolina as a way to stay in shape. I loved it, but I was really good at finding excuses to skip it for the day. When I moved back to Michigan in 2014, my goal was to run the Detroit Free Press International Half Marathon. I googled running groups in the area and stumbled upon the 501 Running Group. I joined the group in 2015 and started training for the race.

I made friends and found a niche of runners that ran and raced at my pace; they pushed me to run harder, faster and longer.  I achieved my goal of running the Detroit half, and cut 25 minutes from my previous half marathon time in NC when I trained by myself! I know that 501 was a huge contributor to this accomplishment.

I had a baby about a year ago, so I haven’t been able to devote as much time to running as before. Even though I’m a bit slower and slightly out of shape now, I still have people to run with and encourage me in 501.

The 501 group is a unique running club comprised of all varieties of runners, all with personal running goals, and we come together because of our love of running. We make friends, we improve ourselves, and we have a blast while doing it. 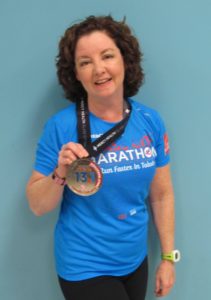 I began running when a friend asked me to run/walk the Detroit Free Press Half Marathon with her.  As an avid cyclist at the time, I thought, Sure! How hard can it be? (Very hard, actually!).  That experience got me interested in running and after completing several 5Ks, 10Ks, and a few more half marathons, I began wondering if it was possible for me to do more. I set a bucket list goal to run a full marathon before my 50th birthday, and joined 501 to help ensure my success.

In 501, I learned a ton about training, injury prevention, and nutrition. The experienced runners were happy to share their knowledge with a newbie. I made new friends and trained with them through all weather conditions.  After completing my one-and-done marathon, I left the group for a few years, but realized that I missed training and more importantly, I really missed my running “peeps.”  I returned to 501 and have since completed four marathons and one 6-hour ultra trail marathon.

I’ll never be a front of the pack runner, but I do challenge myself to improve. Having a group to run with keeps me accountable and motivates me to run when I don’t feel like it. Being a member of the 501 community has kept me engaged with this sport that I have come to love. 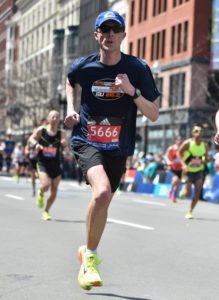 After my third child was born in 2005, I began to run. Pre-mid life crisis? Diversion? Stress reliever?  Not sure, maybe all of the above.  All I know is that I put on my “tennis shoes” and started running 3 miles intermittently throughout that summer.  In 2006 I ran my first race in the Detroit Free Press Marathon relay with some friends. That tipped a domino effect of 5Ks, 10Ks, 10 milers, half marathons and marathons for the next twelve years.

I finished my first bucket list marathon in 2007 and soon found my competitive side kick in, and began trying to improve my times in each race.  My time in the 2010 Detroit Free Press Marathon qualified me for the Boston Marathon.  Since then, I’ve run Boston from 2012 through 2017.  In 2016 I set a goal of breaking the 3-hour barrier only to achieve an exact 3 hour finish in Boston.  Later that year I finally broke through 3 hours with a 2 hour 55 minute marathon in Grand Rapids.

Running is multifaceted. It’s easy to view it as a solitary sport. That’s how my journey started – me and my “tennis shoes.”  In 2012, after joining the 501 group, it became evident that running could be so much more with the support, camaraderie, and wisdom of fellow runners. I could never have achieved my personal records without the 501 group.  Each member of the 501 Running Club has a love and personal reason for running. 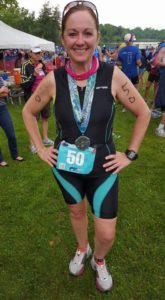 I started running in my mid-40s when I realized how out of shape I had become. After running my first 5K I thought that was the greatest I would ever achieve. Then my husband and I joined 501. This group has helped me push myself to do things I never thought I was capable of accomplishing!  I have run countless 5Ks and 10Ks, 13 half-marathons, and one full marathon. I have also been a member of the “Don’t Lose Bruce” Great Lakes Relay team since its inception in 2012.  Over the past several years I have turned my focus to triathlons, completing several sprint and Olympic distance events. I am a back-of-the pack runner who loves the experience and camaraderie of being part of a team. I have made many life-long friends in 501 and am looking forward to meeting many more! 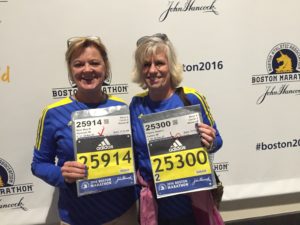 After struggling to finish two marathons on her own, Marsha came to 501 looking for a group to help her truly conquer the marathon distance.  Within few weeks of joining the group, she found a pack of runners who ran her pace, including Sue who had joined 501 to train specifically for a marathon and had two Detroit Free Press Marathons under her belt. It didn’t take long for these ladies to discover that they ran with the same cadence and shared the same drive to succeed.  They quickly became each other’s support system and go-to “running buddy.”

Marsha and Sue logged most of their training miles together for the 2014 Detroit Free Press Marathon.  On race day, Sue took the lead and pushed their pace in the final few miles and… Marsha crossed the Finish Line with a qualifying time for the Boston Marathon (BQ)!  Ten months later, it was Marsha’s turn to push Sue as she flew to the Finish Line of the Grand Rapids Last Chance BQ Marathon and secured her spot next to Marsha on the starting line of the 2016 Boston Marathon.

Then, in November 2017, these ultimate running buddies raced through the streets of New York City, sporting matching singlets that read “Sole Sisters  #Detroit.”  For their 12th marathon in April 2018, Sue and Marsha are looking forward to returning to the Boston Marathon where they plan to make their 26.2-mile journey from Hopkinton to Boston in locked steps.